This is a historic event in New Hyde Park.  The engineering feat is remarkable.  We watched a 6 million ton structure pushed some 200 feet into place to support Second Avenue and the LIRR’s three tracks.  We were highly skeptical that the project would be completed on time; it was.

While the engineers and workers who made this happen deserve our congratulations, so too do the people of New Hyde Park who have put up with all of the adverse impacts that we have suffered so that timeline could be achieved.  The noise, the vibration, the traffic, the constant din of back up alarms and diesel engines running through the night powering generators, lights, trucks and trains were the daily routine for many people who live near the tracks.  Some people were temporarily displaced from their homes to avoid around the clock construction outside of their windows.  Some suffered damage to their cars as passing trains threw excess gravel the railroad laid to raise the tracks five feet.  Many people endured unprecedented levels of traffic in our suburban streets as commuters used our once quiet roads to weave their way north in the morning and south at night to find diminishing passages over the main line.

We have endured a lot – for a project we did not ask for.  The people of New Hyde Park deserve credit and congratulations for this grade crossing elimination.  Their tolerance of these pains, with dignity was a necessary collateral affect throughout the six-month gestation.  Those people, especially those living close to the rails were unwitting partners in this project.  Yet they behaved with grace under duress.

Yet, we’ve seen little concern in the press for us New Hyde Park NIMBYs.  The term raddles me like the freight trains that shake my house.  I would count those that use the term as hypocrites, as I suspect they themselves would also resist having to live under similar conditions.  The people of New Hyde Park have absorbed the pain from this project and deserve the admiration from the region that will benefit.

So, while this milestone will be passed, the weeks and months ahead will only get worse.  There will be an increase in the intensity of work done in New Hyde Park than we have already experienced.  The platform work has been moved forward in the 9.8 mile schedule.  A temporary platform is already being built that will shift the station and platform to the west of South 12th Street.  The work on New Hyde Park Road crossing will be ramping up in January.  The drainage and pumping station for the New Hyde Park Road underpass is being built now. 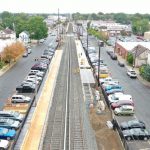 Our experiences with the closure of Covert Avenue has caused us to demand a much more comprehensive traffic management plan for the New Hyde Park Road underpass.  The reconfiguration of the platforms has the Village calling for parking solutions for situations that are now being presented to us.

That is not to say that Covert Avenue is behind us.  We still have the issue of controlling traffic volume on Covert.  We have long positioned for a traffic signal at Sixth Avenue.  The issue was batted between the MTA and the County until the County agreed to take up the traffic study using 3TC’s projected data. Ultimately, the County found conditions insufficient to warrant a traffic light.  The Village installed stop signs to control the intersection.  The County has agreed to conduct a study using actual traffic data once Covert Avenue reopens.  We will take the stop signs out of service during the data collection period to support the new analysis, returning the stop signs to service until the study is finalized and a light is installed.

This intersection is problematic for several reasons.  It sits behind a blind curve of Covert Avenue at a place where motorists typically accelerate.  The extremely narrow appearance of the Covert Avenue underpass would seem to create a Bernoulli effect as motorists who feel squeezed in the narrow passage emerge up the hill and eager to make up for lost time slowing down.

The Village also protested the erection of large steel utility poles that appeared out of character with the suburban character of New Hyde Park.  During meetings with the LIRR, we agreed to a solution that would reduce the total number of poles by 50% and create a skyline that has an overhead wiring structure that is much more organized and ultimately more aesthetically appealing than the spaghetti structure of wires we have today.

The Village will continue to work with the MTA and 3TC in every aspect of this mega-project to do everything possible to minimize the adverse effects on our community during construction and to ensure the village is left safer and more appealing than before.