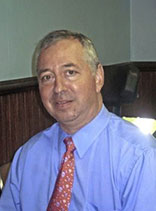 It is with indescribable sadness that I announce that New Hyde Park Village Trustee Donald Barbieri has passed away.  Donald succumbed to complications from his long fight with Multiple Sclerosis; a devastating disease that tortured him, but never deterred him from serving the people of New Hyde Park. Don is now free from the clutches of that awful disease.

Donald was a life-long resident of New Hyde Park and loved the people who lived here.  He had tremendous pride in our village and despite dealing with constant pain and discomfort, worked very hard to make it a better place for each and every person.  He was an inspiration to all of us.

Don was very compassionate and insisted the rest of the board be so, too.  He frequently viewed issues from the opposite side of the way a conversation was going to make sure that all aspects were being considered.  When debating taking an action, Donnie made the village board look through the eyes of a proverbial resident, “Mrs. Jones”; so we all considered the worst possible impact to the most vulnerable person.

Donald has been a Village Trustee for 18 years, first elected in 2000.  He was born and raised in New Hyde Park, attending New Hyde Park schools and Holy Spirit Church.  He has been an active and involved citizen and community leader.  Donnie was a fixture in New Hyde Park; loved by so many.

Don worked tirelessly on the improvements we see today along Jericho Turnpike.  The brick inlayed sidewalks, landscaped bulb outs and center medians would not exist today if it was not for Donnie’s incredible persistence; just one of his many endearing qualities.

So much more could and will be said about Donnie’s accomplishments and contributions to the people of New Hyde Park, but the emotions of the moment prevents a more thorough collection of thoughts.

Donnie will be missed tremendously.    The entire Village Family is in shock and grief.  Our hearts go out to Donnie’s family in this incredibly sad time.